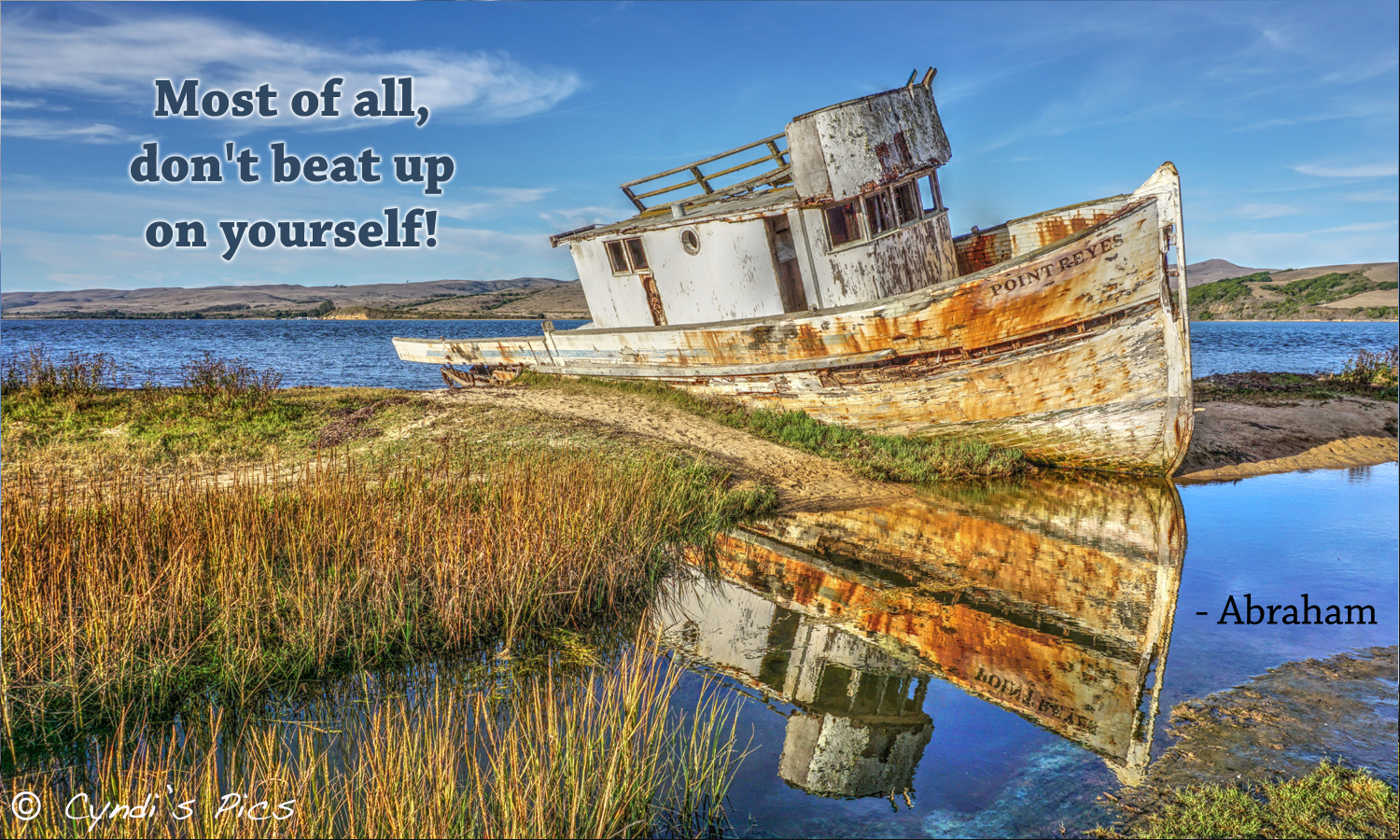 It’s a familiar story to most of us.  We set a goal. We make a plan to reach the goal.  Something happens that gets in our way of reaching the goal.  We realize we did not achieve what we set out to do.  We beat the crap out of ourselves for our utter, degrading failure.

Sometimes we get carried away and beat ourselves up over not just the current “failure,” but every failure we have failed up until this very disappointing failure of a moment.

You have discovered a path that does not lead where you thought you wanted to go.  What do you see?  What can you learn?  Is there a new road sign now that you could not see before?  Your journey will always bring you right where you need to be to learn the lessons your Soul came to learn.

All we do when we beat up on ourselves for anything is drain our own, precious energy.

I used to do a REALLY good job of beating myself up over not sticking to my eating plan.  Over the years I have adopted many different eating plans, for different reasons (MOSTLY because I was unhappy with the way I looked), that I have stuck to with varying degrees of success.  One misstep was an excuse to fall off a plan I didn’t want to stick with anyway, and beat myself up for the wretched, miserable failure that I obviously was.

But why stop there?  I was super good at reminding myself of all the other times I had failed miserably, compounding that “I suck” vibe, and really making it my own!

But I was missing the point, and the opportunity.

Instead of identifying MYSELF as failed, I had the opportunity to stop and observe.  What’s really going on?  Why did I fail to achieve success?

The old broken record would have me believe I was a failure.  But when I finally had to reject that thought because it felt so NASTY inside me when I thought it (it literally made me feel physically ill), then I began to see that I ‘failed’ at something only when I didn’t really want to achieve it anyway.

I thought I wanted to lose weight so that people would find me attractive.  Our culture promotes physical beauty as something to be valued above most other attributes, so that’s what I wanted; to be accepted by cultural standards.  But since physical attractiveness is not something that I value personally, it was NEVER going to be enough to motivate me to stop eating foods that I love!

Do this long enough and some people don’t have the energy to get up and try again. To break the cycle – first of all, stop beating yourself up!

Think of your self as an airplane.

As Brian Tracy tells us in his book entitled Flight Plan – The Real Secret of Success, “Life is like an airplane journey. From the time you take off, you will be off course 99% of the time. All airplanes are off course 99% of the time. The purpose and role of the pilot and the avionics is to continually bring the plane back on course so that it arrives on schedule at its destination.”

So, why beat yourself up if being off course is 99% of life?

Set your goals and keep moving toward them.  When you get off course (and you WILL!) just gently course correct and keep moving forward.  This is the most efficient way, the way that saves our energy, and gets us where we want to be faster.

Stopping to beat yourself up is exhausting.  It wastes energy and time and makes us feel crappy. So STOP it.

Admire yourself for simply recognizing your drift!

Then you get to choose:
1) stay with the drift back toward old behaviors, or
2) course correct back to where you are consciously wanting to go.

When I get of course now, I look for what it was that tripped me up.  I look for the emotion that I was feeling – and usually not wanting to feel – that sent me after ice cream or pizza.   I don’t clobber myself for tripping.  If it was an emotion that tripped me, I tag it as a trigger.  Then I MIGHT see it coming next time, and not trip.  Or it may trip me again.  Then I recognize it, tag it, and choose to correct my course again. It’s a process.

Maybe I recognize that the goal isn’t really something I want, but something I thought I wanted because others wanted it for me, or I thought I was supposed to want it.  In that case I can shift goals, or simply shift the reasons for my goal.

Using my earlier example: I thought I wanted to lose weight so that people would find me attractive, or so I would be attractive by cultural standards.  Actually, I wanted to reduce my weight for a lot of great reasons relating to my health, well-being, and energy levels.  When I was able to shift my focus to those things, the excess weight fell away so fast it made everyone’s heads spin, and scary health issues simply vanished.

No judgement for getting off track.

I am human, so it happens.  Daily.

Instead of wasting time in judgement and blame, I get curious and look for what tripped me up.  Then I know what course corrections I can choose if I want to.

Instead of getting out a big club and draining my own energy into exhausted depression,  I trust the process, and I get better and better at moving toward my goals.  Daily.